Many efforts have been made to develop therapeutic agents for Alzheimer’s Disease (AD) based on the amyloid cascade hypothesis, but there is no effective therapeutic agent at present. Now, much attention has been paid to infiltrate pathogens in the brain as a trigger of AD. These pathogens, or their virulence factors, may directly cross a weakened blood-brain barrier, reach the brain and cause neurological damage by eliciting neuroinflammation. Moreover, there is growing clinical evidence of a correlation between periodontitis and cognitive decline in AD patients. Recent studies have revealed that microglial cathepsin B is increasingly induced by lipopolysaccharide of Porphylomonas gingivalis, a major pathogen of periodontal disease. Moreover, gingipains produced by P. gingivalis play critical roles in neuroinflammation mediated by microglia and cognitive decline in mice. Furthermore, an orally bioavailable and brain-permeable inhibitor of gingipain is now being tested in AD patients. It is largely expected that clinical studies countering bacterial virulence factors may pave the way to establish the prevention and early treatment of AD. 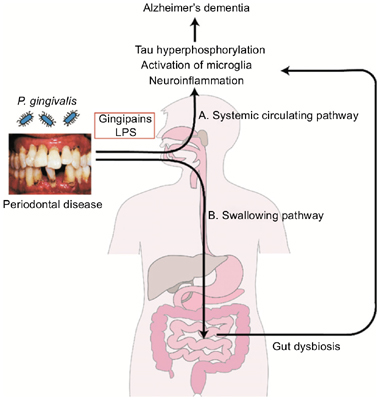