Scopolamine as a drug is often used to treat motion sickness. Derivatives of scopolamine have also found applications as antispasmodic drugs among others. In neuroscience-related research, it is often used to induce cognitive disorders in experimental models as it readily permeates the bloodbrain barrier. In the context of Alzheimer’s disease, its effects include causing cholinergic dysfunction and increasing amyloid-β deposition, both of which are hallmarks of the disease. Hence, the application of scopolamine in Alzheimer’s disease research is proven pivotal but seldom discussed. In this review, the relationship between scopolamine and Alzheimer’s disease will be delineated through an overall effect of scopolamine administration and its specific mechanisms of action, discussing mainly its influences on cholinergic function and amyloid cascade. The validity of scopolamine as a model of cognitive impairment or neurotoxin model will also be discussed in terms of advantages and limitations with future insights. 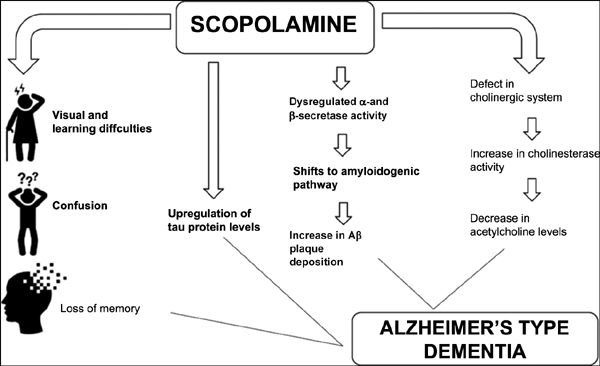