Background: Major Depression Disorder (MDD) is accompanied by an immune response characterized by increased levels of inflammatory and immune-regulatory cytokines and stimulation of indoleamine-2,3-dioxygenase (IDO). There is also evidence that anti-inflammatory drugs may have clinical efficacy in MDD.

Methods: This study examined a) IDO in association with interferon (IFN)-γ, Interleukin (IL)-4 and Transforming Growth Factor (TGF)-β1 in 140 drug-naïve MDD patients and 40 normal controls; and b) the effects of an eight-week treatment of sertraline with or without ketoprofen (a nonsteroidal antiinflammatory drug) on the same biomarkers in 44 MDD patients. Results: Baseline IDO, IFN-γ, TGF-β1 and IL-4 were significantly higher in MDD patients as compared with controls. Treatment with sertraline with or without ketoprofen significantly reduced the baseline levels of all biomarkers to levels which were in the normal range (IDO, TGF-β1, and IL-4) or still somewhat higher than in controls (IFN-γ). Ketoprofen add-on had a significantly greater effect on IDO as compared with placebo. The reductions in IDO, IL-4, and TGF-β1 during treatment were significantly associated with those in the BDI-II. Conclusion: MDD is accompanied by activated immune-inflammatory pathways (including IDO) and the Compensatory Immune-Regulatory System (CIRS). The clinical efficacy of antidepressant treatment may be ascribed at least in part to decrements in IDO and the immune-inflammatory response. These treatments also significantly reduce the more beneficial properties of T helper-2 and T regulatory (Treg) subsets. Future research should develop immune treatments that target the immune-inflammatory response in MDD while enhancing the CIRS. 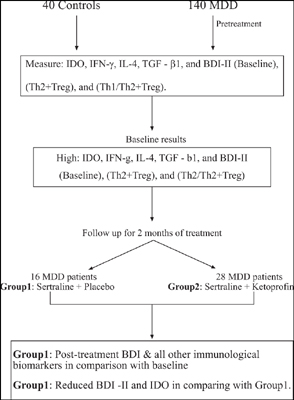