Background: Chalcones are considered as the selective scaffold for the inhibition of MAO-B.

Objectives: A previously synthesized ethyl acetohydroxamate-chalcones (L1-L22) were studied for their inhibitory activities against human recombinant monoamine oxidase A and B (hMAO-A and hMAO-B, respectively) and acetylcholinesterase (AChE) as multi-target directed ligands for the treatment of Alzheimer’s Disease (AD).

Conclusion: The studies indicated that L3 and L4 are considered to be promising multitarget drug molecules with potent, selective, and reversible competitive inhibitors of hMAO-B and with highly potent AChE inhibitory effect. 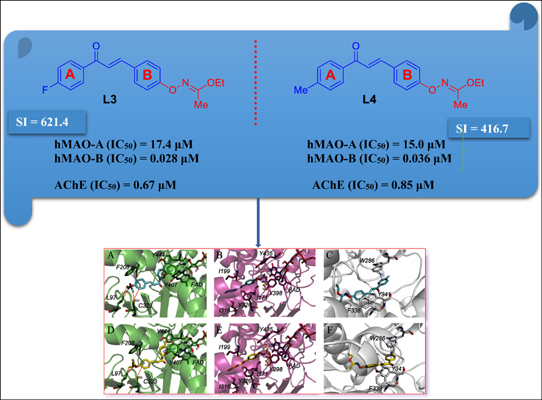