Background: Cinnamon polyphenol extract is a traditional spice commonly used in different areas of the world for the treatment of different disease conditions which are associated with inflammation and oxidative stress. Despite many preclinical studies showing the anti-oxidative and antiinflammatory effects of cinnamon, the underlying mechanisms in signaling pathways via which cinnamon protects the brain after brain trauma remained largely unknown. However, there is still no preclinical study delineating the possible molecular mechanism of neuroprotective effects cinnamon polyphenol extract in Traumatic Brain Injury (TBI). The primary aim of the current study was to test the hypothesis that cinnamon polyphenol extract administration would improve the histopathological outcomes and exert neuroprotective activity through its antioxidative and anti-inflammatory properties following TBI.

Conclusion: Our results identify an important neuroprotective role of cinnamon polyphenol extract in TBI which is mediated by its capability to suppress the inflammation and oxidative injury. Further, specially designed experimental studies to understand the molecular cross-talk between signaling pathways would provide valuable evidence for the therapeutic role of cinnamon in TBI and other TBI related conditions. 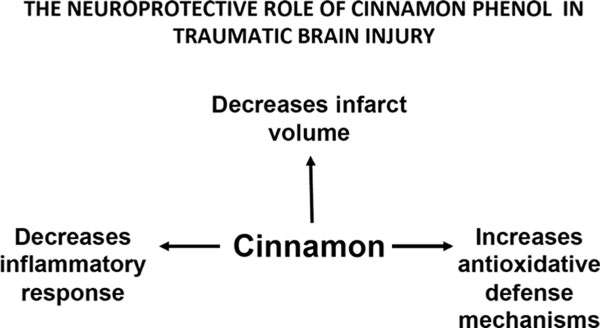