Cognitive Impact of Cerebellar Damage: Is There a Future for Cognitive Rehabilitation?


Background & Objective: During the past 3 decades, numerous neurophysiological, neuroimaging, experimental and clinical studies have evidenced a crucial role for the cerebellum in cognitive, affective and behavioral functions. As a result of the acknowledged modulatory role of the cerebellum upon remote structures such as the cerebral cortex, cerebellar injury may give rise to a constellation of behavioral, affective and cognitive symptoms (Schmahmann's Syndrome). In sharp contrast to the wide range of therapeutic interventions to treat cognitive and affective disorders following cerebral cortical lesions and despite the consequences of Schmahmann’s syndrome upon daily life activities, the literature is surprisingly only scantly documented with studies investigating the impact of cognitive therapies on cerebellar induced cognitive and affective disorders. This survey aims to present an overview of the therapeutic interventions available in the literature as a possible treatment for Schmahmann’s Syndrome after cerebellar injury, after posterior fossa surgery in children, and in children with neurodevelopmental disorders. Although systematical studies are clearly warranted, available evidence suggests that cerebellar-induced cognitive and affective disorders should be treated in a specific way. Approaches where the patients are explicitly made aware of their deficits and are considered to act as an “external cerebellum” are the most promising.

Conclusion: The study of the anatomical connectivity of the cerebellar microcomplexes involved in cognitive/affective deficits is likely to play a major-role in the future. 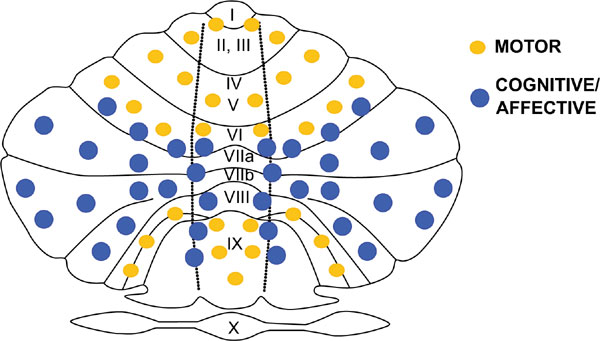