Background and Objective: Stroke is one of the leading causes of death. There has been compelling evidence that stroke has a genetic component. Genetic variants not only influence susceptibility to stroke but have also been found to alter the response to pharmacological agents and influence the clinical outcome of the disease. Stroke patients are treated with antiplatelet drugs like aspirin and clopidogrel to prevent a secondary stroke. In spite of the fact that many new antiplatelet drugs have been developed, aspirin is still considered as a golden standard for the antiplatelet therapy. Aspirin achieves its action by inhibiting platelet cyclooxygenase (COX) system involved in the formation of thromboxane A2 (TXA2). TXA2 triggers reactions leading to platelet activation and aggregation. This Non-steroidal anti-inflammatory drug (NSAID) acts by inhibiting this mediator. Despite the demonstrated benefits of aspirin, many patients develop secondary stroke or other vascular events, an observation that has led to the concept of aspirin resistance.

Studies have demonstrated that adequate antiplatelet effects are not achieved in 5-45% patients suggesting that many individuals are aspirin resistant. Aspirin resistance is multifactorial in origin. A genetic component has also been suggested, and variants in more than a dozen genes involved in absorption, distribution, metabolism, excretion (ADME) and pharmacodynamics of aspirin have been shown to be responsible for aspirin resistance. In addition, the patients on aspirin treatment also face adverse drug reactions on account of genetic variation.

Conclusion: The present review has been compiled with an aim to revisit all the studies related to genetic variation contributing to aspirin resistance as well as adverse drug reactions. The output of high throughput genomic technology like genome wide association studies and others has also been discussed. 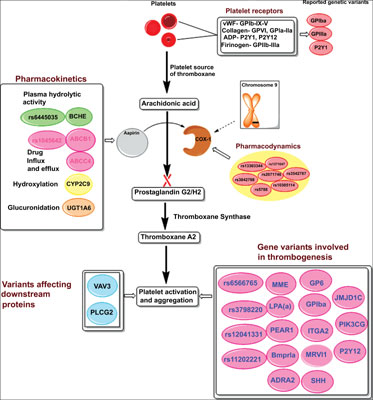