Background & Objective: Neurotransplantation has been recently the focus of interest as a promising therapy to substitute lost cerebellar neurons and improve cerebellar ataxias. However, since cell differentiation and synaptic formation are required to obtain a functional circuitry, highly integrated reproduction of cerebellar anatomy is not a simple process. Rather than a genuine replacement, recent studies have shown that grafted cells rescue surviving cells from neurodegeneration by exerting trophic effects, supporting mitochondrial function, modulating neuroinflammation, stimulating endogenous regenerative processes, and facilitating cerebellar compensatory properties thanks to neural plasticity. On the other hand, accumulating clinical evidence suggests that the self-recovery capacity is still preserved even if the cerebellum is affected by a diffuse and progressive pathology. We put forward the period with intact recovery capacity as “restorable stage” and the notion of reversal capacity as “cerebellar reserve”. 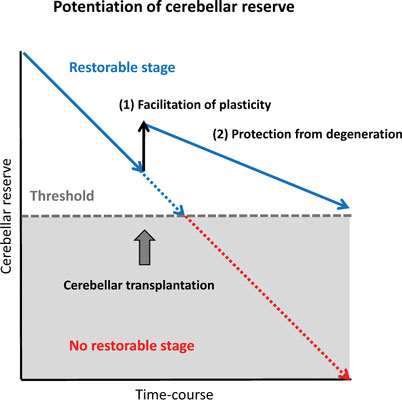